From the Field – Natural Cats – Tracking Hurricanes in the Atlantic Basin

Ironshore’s recent executive seminars for broker partners in California and Washington was an overview of the methodology and history of the longest running hurricane seasonal forecast as well as the latest predictions for 2019. Our guest speaker, Dr. Phil Klotzbach, is a Research Scientist at the Tropical Meteorology Project in the Department of Atmospheric Science at Colorado State University. Dr. Klotzbach began as co-author on the Atlantic basin hurricane forecasts with Dr. William (Bill) Gray who began issuing these forecasts in 1984. Dr. Klotzbach became first author on the seasonal hurricane forecasts in 2006. He also developed the two- week forecasts currently being issued during the peak months of the hurricane season between August-October. Ironshore has been a sponsor of the Atlantic basin hurricane forecasts since 2014.

In 2010, the population of the East Coast was estimated at 112 Million (36% of the country)1. The East Coast continues to be the most populated coastal area in the United States and is projected to grow an additional 8% from 2010 to 2020. This increasing coastal development and population migration mean that hurricanes will continue to be an expensive peril for P&C insurance carriers. The combination of high winds, intense rainfall and hurricane storm surge flooding means that even a well-prepared coastal town is at risk of catastrophic losses. However, better predictions provide an opportunity for insureds and their clients to mitigate risks and get themselves and their property out of harm’s way. 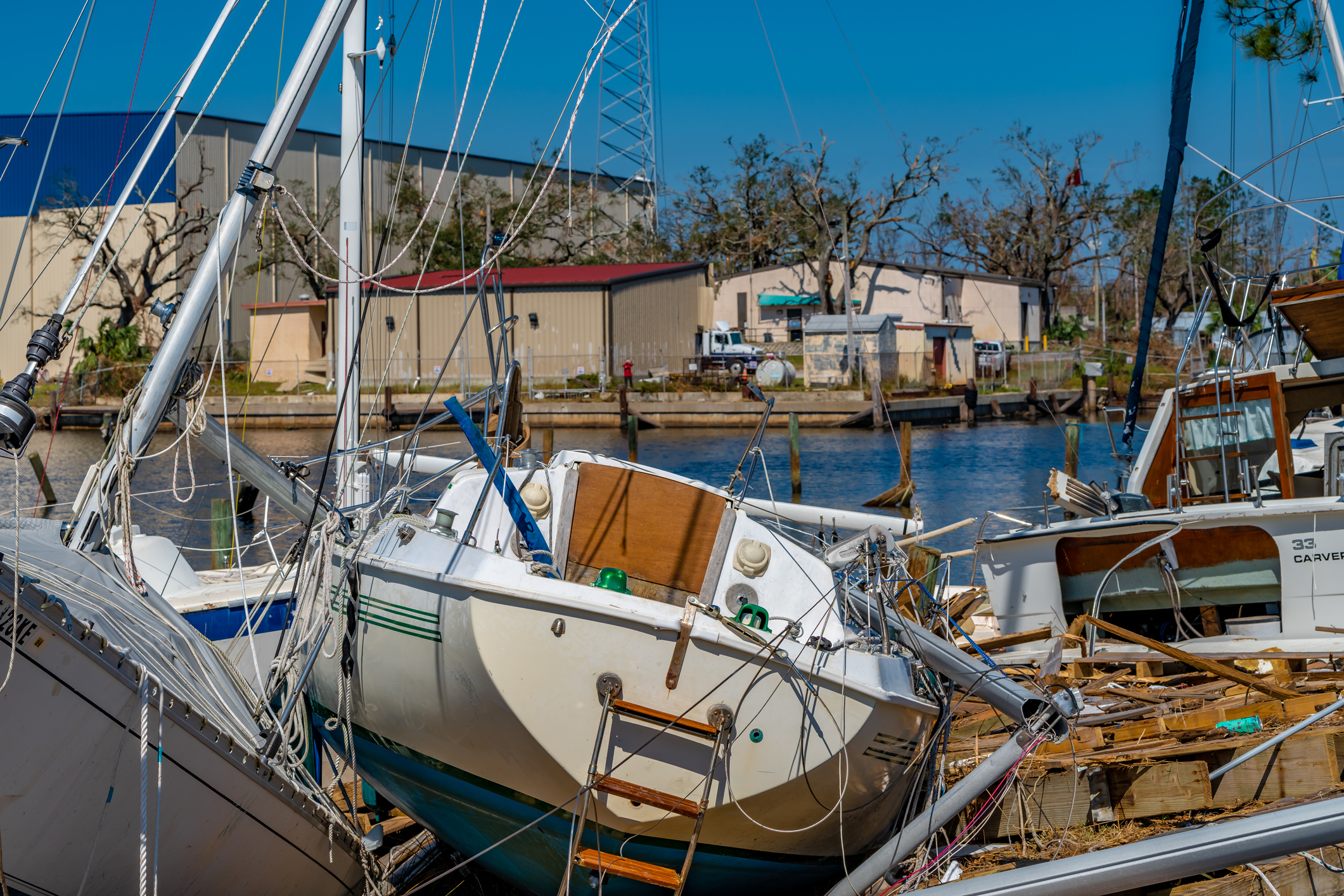 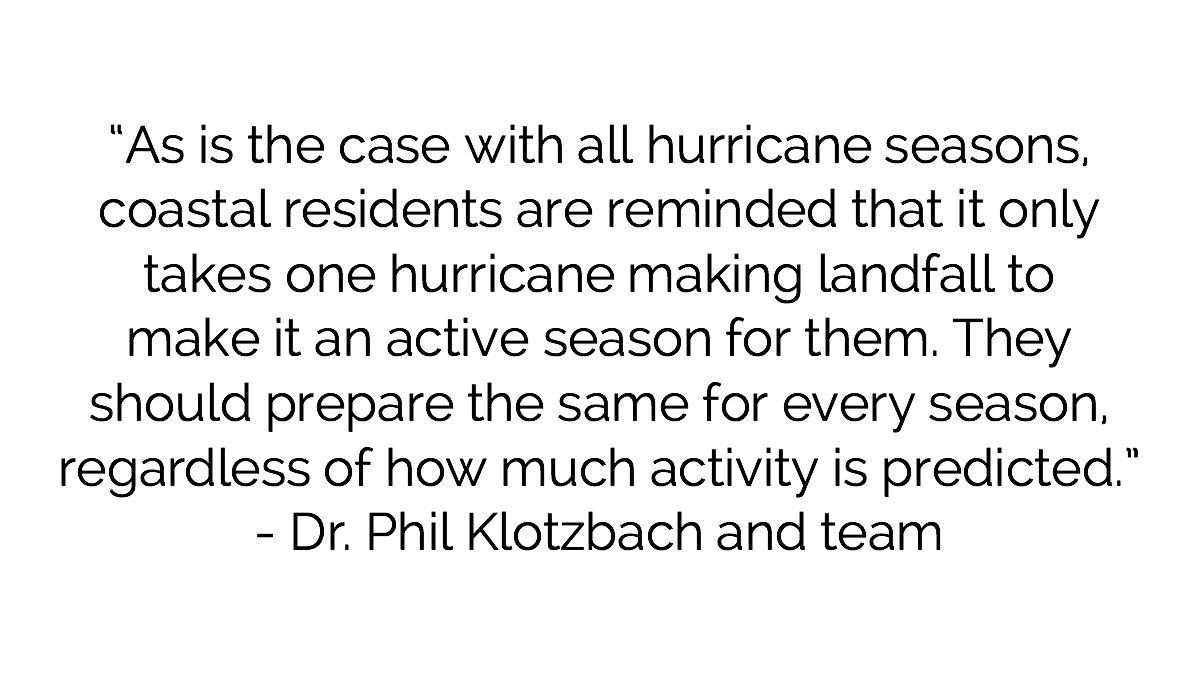 June 1 marks the official start of the Atlantic hurricane season, which peaks in September and ends November 30. The CSU team expects there to be 14 named storms this year, up from the 13 named storms it predicted in April, before the hurricane season started. They are calling for seven hurricanes this season, , with two of these seven hurricanes becoming major. Major hurricanes are Category 3 or higher, with wind speeds of at least 111 mph. The team is predicting 2019 to be near normal hurricane season due to near-average surface temperatures in the tropical Atlantic and the weakening of El Nino in the tropical Pacific.

Finding the key to the pattern and developing a predictive model

The late Dr. William Gray, who conducted research in atmospheric science at CSU for nearly 60 years, made an important discovery. When analyzing historical hurricane data, he noticed a correlation between decreased Atlantic hurricane activity and El Niño years, when a large zone of warmer-than-normal water develops in the eastern and central tropical Pacific. Curious as to why this warm Pacific water would be linked to less active Atlantic hurricane seasons, he took a closer look at the data and was able to establish a causal relationship.

He determined that El Niño alters lower and upper-level winds in the atmosphere, producing an increase in vertical wind shear. Wind shear is created when winds blow at different speeds and directions at different heights in the atmosphere. In the tropical Atlantic lower level winds blow out of the east and upper level winds blow out of the west. Hurricanes tend to weaken in the face of strong vertical wind shear because the strong shear tend to tear hurricanes apart. The chart below illustrates the difference between El Niño and its opposite effect, La Niña, which promotes wind patterns that are more conducive for active Atlantic hurricane seasons. 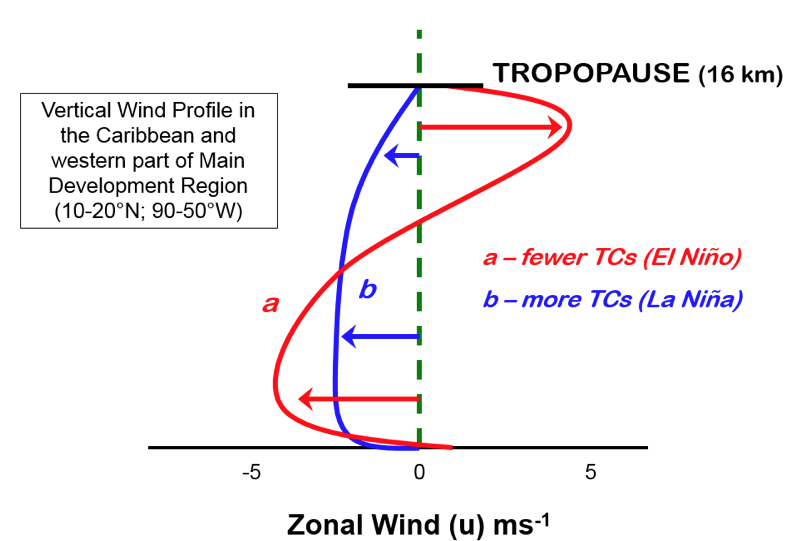 In addition to El Niño, the CSU lab uses a variety of other predictors to come up with its forecasts. Through composite analysis, they look for precursor signals – conditions in the atmosphere and ocean that preceded active or inactive hurricane seasons over the past 60 years.

These predictors include tropical Atlantic sea surface temperatures and sea level pressures. Atlantic hurricane seasons tend to be more active when the tropical Atlantic is warmer than normal, since a hurricane gets its energy from warm ocean water. Lower pressures are associated with a more unstable atmosphere, which creates conditions more conducive for strong thunderstorms to develop. These strong thunderstorms are the building blocks of hurricanes.

There is always a lot of interest in how active the upcoming Atlantic hurricane season is likely to be. While CSU’s forecasts can show a remarkable level of accuracy, they are not a crystal ball. These predictions are an informational tool, not a preparedness tool. The National Hurricane Center, which is part of the National Oceanic and Atmospheric Administration, issues watches, warnings and reports on individual storms.

Ironshore had its own stormy beginnings. We were founded in the midst of the subprime meltdown and the catastrophic losses stemming from Hurricanes Katrina, Wilma and Rita. Two industry leaders, Bob and John Clements, came together in 2006 with the belief that, “The right leadership leads to the best partnerships.” With that in mind, they assembled a team with years of expertise in specialty areas of insurance. Today, Ironshore provides specialty coverage for various risks across a broad spectrum of industries as a strategic operating unit of Liberty Mutual. Our company was designed to be nimble and provide access to senior leadership who take the time to understand our clients’ business, adapt to change and provide innovative solutions.

We share Liberty Mutual’s mission to help people embrace today so they can confidently pursue tomorrow. The promise we make to our customers is to provide protection for the unexpected, delivered with care. For our business customers, Liberty Mutual and Ironshore partner with brokers and buyers to help companies better control the total cost of risk through custom programs that blend effective coverages with industry-leading risk control and claims management.

All charts by Dr. Phil Klotzbach

Four complications that come with the shift to telehealth

PFAS: the extraordinarily costly liability you need to know about