From the Field - Natural Cats - Earthquakes

Ironshore’s recent executive seminars for broker partners in California and Washington was an overview of Natural Catastrophes - Hurricanes, Earthquakes and Wildfires and the methodology used to measure, track and in some cases, predict events. Our previous post focused on hurricanes. This post is an introduction to earthquake seismology with application to hazard and risk assessment featuring the seismic expertise of Dr. Carl Ebeling, Senior Development Engineer at the Institute of Geophysics and Planetary Physics, at UC-San Diego.

Seismology itself is the measure of vibrations in the earth’s interior. The majority of data we have to measure these vibrations come from seismographs which are instruments that measure and record seismic waves caused by an earthquake, explosion, or other Earth-shaking phenomenon.

The Earth’s crust consists of “plates” that are very slowly moving relative to each other. As these tectonic plates diverge (expansional) and converge (compressional), stress accumulates along the fault lines and when there is no longer enough friction to hold the rocks together, the plates slip suddenly. This energy is released in waves that travel out in all directions an causing the shaking we feel during an earthquake.

The relative motion between the plates controls what type of a fault results. There are four major types of faults. These are primary types. Earthquakes can include more than one of these types of faults in varying combinations: 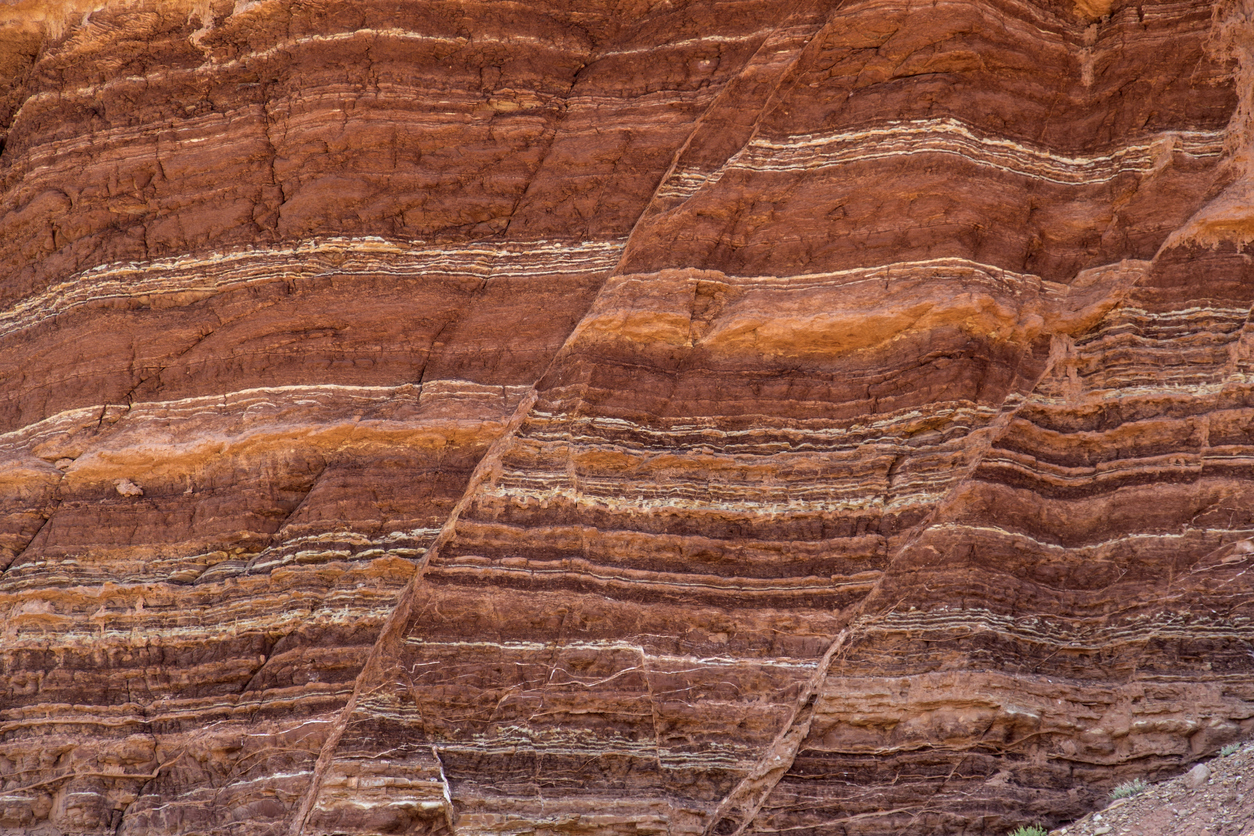 How common are earthquakes?

It depends on the magnitude. For example, the most severe, Magnitude (M) 9, do not occur very frequently, M 8 occur annually, M 7 occur every few weeks, all the way down to M 2 and less which occur hundreds of times per day. An additional factor at play is the increasing network of seismographs which allow for better monitoring and detection of earthquakes. The number of earthquakes is not increasing per se, but the number that are detected is increasing.

Earthquakes produce body waves and surface waves. These waves differ in their types of motion, how they travel through the earth, and their speed.

An earthquake radiates body waves in 3 dimensions from the source. They are divided in to 2 types: Primary (P) and Secondary (S). As they pass through the Earth on their journey from the source to the epicenter on the surface, they are refracted, deflected and converge in complex ways. 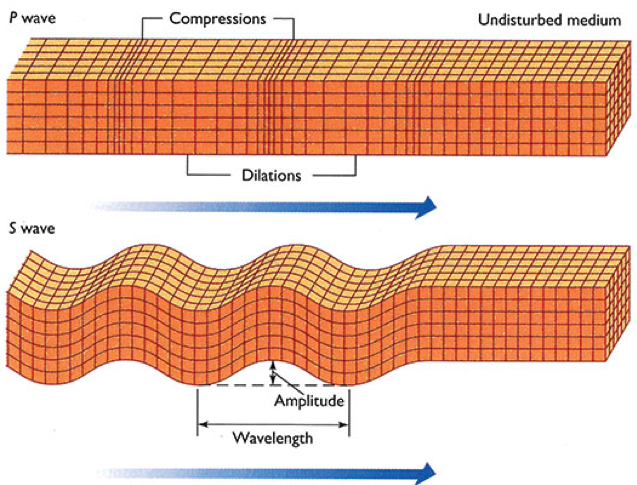 When body waves reach the surface of the earth, they create surface waves of 2 types: Love waves and Rayleigh waves. These surface waves travel from the epicenter in 2 dimensions and can occur multiple times well after the event is over. 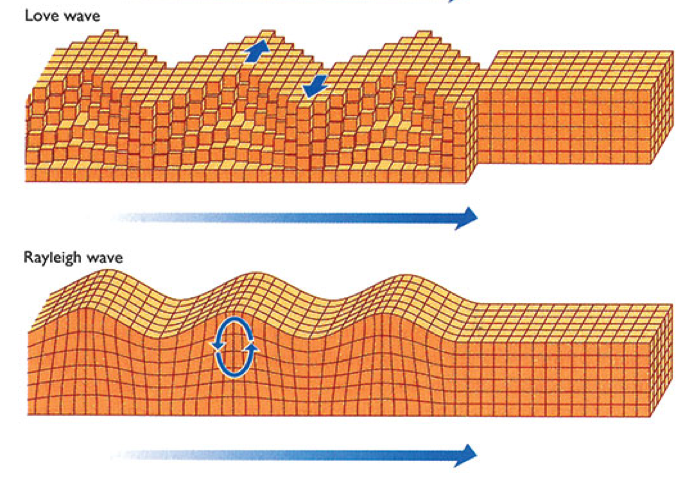 Seismographs measure and record seismic waves when they arrive at the surface and based on the arrival times and amplitudes of seismic waves measured from many stations, seismologists are able to infer the velocity and put together a picture of the structure of the Earth’s interior and how the waves travelled through the earth. Below are the paths for seismic waves from the 1994 Northridge earthquake that were recorded at seismic stations around the world. Seismograms for these seismic stations are shown on the right.1 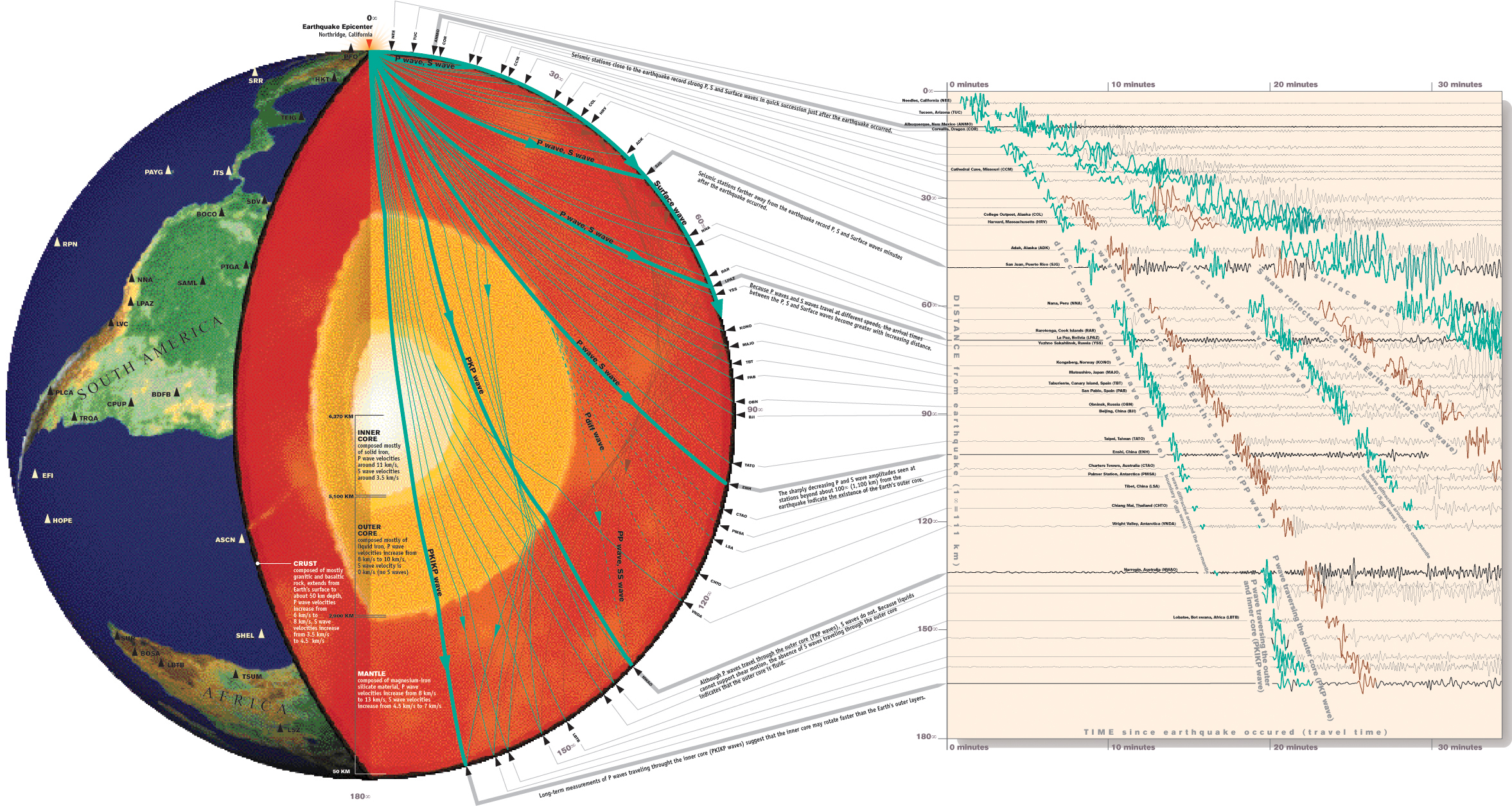 After determining location, we want to determine how strong the earthquake was. Understanding the effects in relation to what was recorded on the seismograph can lead to better building codes, emergency preparedness plans, and damage assessments.

Development of a magnitude scale began in 1934, when Richter developed a scale (ML)that measured peak wave amplitude and was specific to a seismograph he used in Southern California. Unfortunately, Richter’s scale proved to be ineffective when measuring larger earthquakes and was not as accurate in different locations. Seismologists then developed magnitude scales based on body (mb) and surface (MS) wave magnitudes. While these scales were better at measuring earthquakes over longer distances, they also proved less effective in measuring large earthquakes due their dependence on peak amplitude measurement. They were also azimuthally dependent which means 2 seismic stations may measure 2 different magnitudes for the same earthquake. With very large earthquakes, (over 8.0) the waves become saturated making it difficult to measure peak amplitude accurately.

The moment magnitude (MW) scale was developed in the late 1970s and has become an accepted scientific standard. It was designed to measure the total energy released by an earthquake. The scale calculates an earthquake’s seismic moment (M0) by multiplying the rigidity of the rock along the fault, times the area of the fault that slipped, times the distance the fault moved. The moment magnitude scale avoided the saturation problem and could be used to determine the magnitudes of the largest earthquakes.

When is “The Big One” going to happen?

Earthquake magnitude and ground shaking intensity are 2 different concepts that tend to be confused. Magnitude is a measure of the energy released at the source of the earthquake determined by measurements of ground motion made by seismographs. It is site independent meaning the magnitude of an earthquake is the same regardless of the location of the seismographs. Ground shaking intensity becomes important when discussing damage reports and hazard assessments for risk calculations. Specifically, it is the measure of the shaking created by an earthquake at a particular site and can vary from site to site for the same earthquake and between earthquakes of the same magnitude. This is due to differences in geology as well as the depth of the earthquake and distance from the fault. Intensity is determined by evaluating, sometimes subjectively, the effect of the shaking on people, the environment and structures. This evaluation approach is represented on a 10-point scale using Roman numerals.

“There is no method known to reliably and accurately predict earthquakes.”

Although many have tried and there is a scientific panel in place to evaluate scientists who propose methods to predict earthquakes, no claimed prediction has been validated by the panel. Prediction is made difficult because

Rather than chasing the seismic alchemy of earthquake prediction, time is better spent leveraging the knowledge we already have of earthquake hazards to reduce future damage and losses.

Development of an early warning system, ShakeAlert, is underway in California. It is triggered by the first arriving and less damaging P waves and designed to warn of soon to arrive and potentially dangerous shaking produced by the S waves of a recent earthquake. The system goals are to detect, identify and characterize the earthquake quickly enough to provide a few seconds to a minute of warning. Except at the epicenter, the hope is to provide enough time to alert trains and airports, shut off gas mains, or close bridges and tunnels to save lives and reduce damage. If successful it should also improve local resiliency in the long term. Japan and Mexico City currently have similar systems in place.

The USGS produces a probabilistic map (see below) that shows expectations for damaging shaking from all possible earthquakes over a 10,000 year period. It shows possibilities for the future based on the past. This map takes into account geologic and seismic information, including: 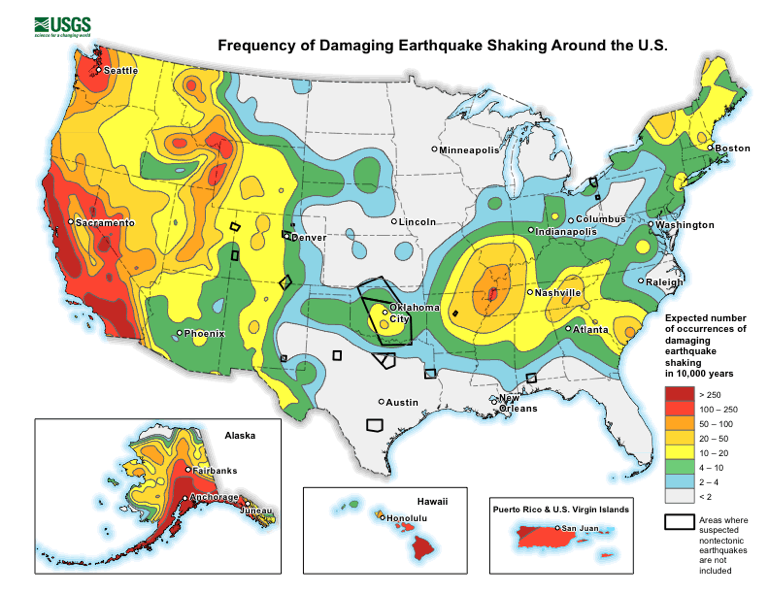 This map depicts the general earthquake hazard across the US not earthquake risk. To understand risk, you need to add information about buildings, infrastructure, and/or people. High earthquake hazard does not mean high risk. “Also, while you can’t change the underlying earthquake hazard, you can reduce earthquake risk by managing the built environment.”2“These maps were created to provide the most accurate and detailed information possible to assist engineers in designing buildings, bridges, highways, and utilities that will withstand shaking from earthquakes in the United States. These maps are used to create and update the building codes and to help establish construction requirements necessary to preserve public safety.”3

Earthquake risks are the harm or losses that are likely to result from exposure to earthquake hazards. They are usually measured in terms of expected casualties, direct economic losses (repair and replacement costs) and indirect economic losses (income lost during downtime resulting from damage to private property or public infrastructure). Other, more specific measures of risk are also used for disaster planning, such as probable volumes and durations of utility outages and displaced households and amounts of debris likely to be generated.4“The impact of earthquakes on public safety and the national economy can be reduced through improvement of the built environment to resist earthquake effects such as ground shaking. Reduction of the economic impact on individuals and the nation can also be reduced by additional means such as earthquake insurance.”5

Hazus contains models for estimating potential losses from earthquakes, floods, and hurricanes. It estimates physical, economic, and social impacts of disasters and graphically illustrates the limits of high-risk locations due to earthquake, hurricane, flood, and tsunami.

Hazus is used for mitigation and recovery, as well as preparedness and response. Government planners, GIS specialists, and emergency managers use Hazus to determine losses and the most beneficial mitigation approaches to take to minimize them. Probabilistic loss estimates analyzed in Hazus include:

US estimated annualized earthquake losses to the national building stock is $6.1 billion per year. The 61% is concentrated in the state of California and overall, the West Coast (California, Oregon, and Washington) accounts for 73% of the total average annual loss in the U.S. The high concentration of loss in California is consistent with the state’s high seismic hazard and large structural exposure. The remaining 27% of annual loss is distributed throughout the rest of the United States 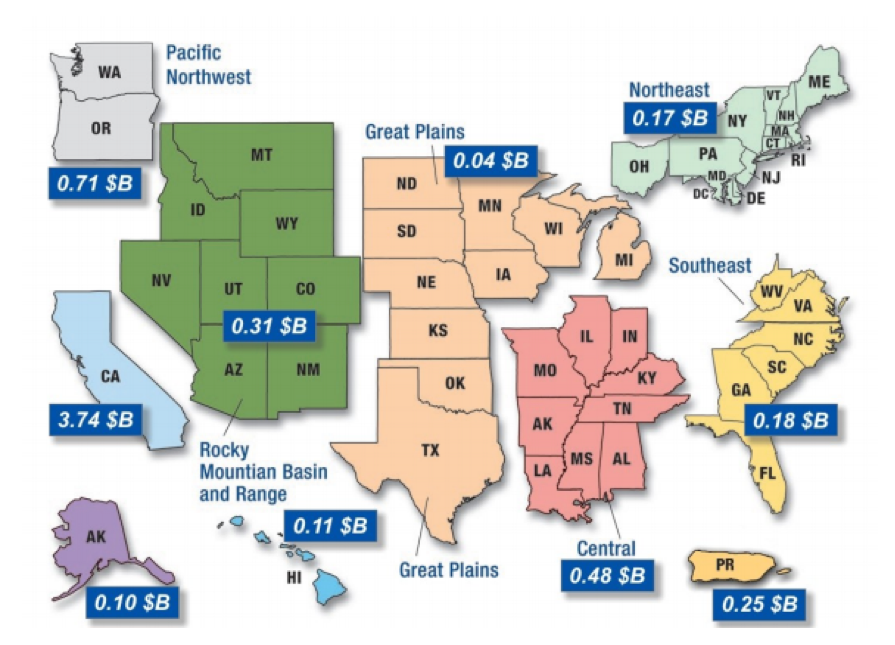 Any natural catastrophe can pose a threat to business operations. By taking measures to prepare, businesses can increase their resilience and minimize financial impacts of a disaster. One of these steps includes reviewing insurance coverages to ensure the right amount and types of insurance are in place for their businesses needs and risk profile.

Four complications that come with the shift to telehealth

PFAS: the extraordinarily costly liability you need to know about